”The opposite of addiction isn’t sobriety, it is connection.”  Johann Hari


Substance abuse in South Africa is twice the world norm. Statistics supplied Dr Antoinette Basson of the Youth Research Unit at UNISA in 2017 found that 60% of substance abusers in the Western Cape are younger than 20 years old.

How bad is the drug situation among our kids?

Drugs in schools is serious business. The Western Cape Education Department recently raised the alarm bells after drug testing of students during the first half of 2017 revealed truly worrying results. ACCSA Addiction Education College gave the following results in an article October 9, 2017:

The crippling damage drugs cause to the brain has remained unseen – until recently. SPECT stands for single photon emission computerized tomography, a method for imaging the activity of the brain. It shows areas of activity and inactivity. The “holes” in the brain are actually areas that are inactivated by the use of a drug or the practice of some behavior. Abstinence will restore much but not all of the brain function. The more chronic the use, the less restoration of activity.

Why are kids so easily persuaded to start using? 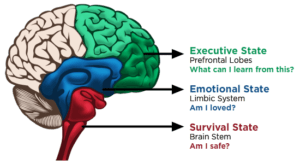 In teens and children the emotional brain is developed long before the pre-frontal  lobes. The prefrontal lobes or Neo-cortex is the area of the brain responsible for problem solving, conscious thought, and language. The pre-frontal lobes are only fully develop by age 25 years. This is the part of the brain that responds to situations with good judgment and an awareness of long-term consequences. This is usually the time a young person starts to realize they have a problem quitting drugs. Teens and children do not have the capacity yet to think analytically.

A teen’s desire to be liked, accepted and fit in originates in the emotional brain.  They process most information with the emotional brain. This makes them a target for drug dealers.  They make decisions based on emotions, without considering the long term consequences – just because it feels right. Later they struggle to explain what they were thinking.Truth is they weren’t thinking as much as they were feeling.

A child who comes from a home where their basic needs are not met, are more prone to start using drugs as a coping or soothing mechanism. In fact, scientists discovered that for each traumatic incident that happened to a child, they were 2-4 times more likely to grow up to be an addicted adult.

What causes addiction? Easy, right? Drugs cause addiction. But maybe it is not that simple.

Who are more likely to start using drugs

A person is more susceptible to start using drugs if they

Hurt is at the centre of all addictive behaviors. Gabor Maté

Signs that your child may be using drugs

Confronting a child about possible drug use is a conversation that no parent wants to have. Please note that ”Some addicts never recognise the harm their behaviors cause and never form resolutions to end them. ” says Gabor Maté. Here’s what to do if your child is using drugs.

Stay calm at all cost

Substance abuse affects families – never only the addict.  Addressing a serious drug or alcohol abuse issue within the family puts parents to the test as much as anything ever will. But it’s important that, above all else, you remain calm. If you suspect there’s an underlying substance abuse issue with your teen, it’s not the end of the world. No matter what, this is still your child; how you react can mean all the difference in their recovery.

Talk to your child

Your teenager goes through changes that are a normal part of adolescence. But some changes are windows into more sinister things — like experimentation with drugs or alcohol.

It’s ok to get in professional help

You’re not a superhero. Nobody expects you to be. As signs start to build, reach out for help in the matter. Assuming you can help your teenager by yourself can be overwhelming in situations like these, and can set you — and more importantly, your teen — up for failure. Realize you are not alone, and the challenges ahead can start to appear more and more conquerable.

Help can be in the form of:

Building a support network will help you keep a level head, get various perspectives on the situation and make the best decision for moving forward.

Be carefull of drug enabling

Enabling means ”to make it possible to do something”.

Often, parents of teens wrapped up in substance abuse slip into enabling. This is when the detrimental behavior is implicitly accepted and allowed to continue because a parent is in denial of the circumstances their teen finds themselves in. What does enabling look like?

Does my child need professional help?

You can do a self-test quiz on addiction: Substance Abuse Quiz.

You can chat to a facilitator if you need more help. The Live Chat helpline is a text-based chat that is online every Sunday : 18h00-20h00; Monday- Thursday from 19h00 – 21h00. You may remain anonymous. Click on LIVE CHAT.

In the realm of Hungry Ghosts. Dr Gabor Maté. 2018

Chasing the scream. The first and last days of the war on drugs. Johann Hari. 2015