Fentanyl  is legally produced by pharmaceutical companies as a prescription medicine for pain and is known by such names as Actiq®, Duragesic®, and Sublimaze®.   Fentanyl is also made illegally and distributed as a street drug. Street names for illegally used fentanyl include Apache, China Girl, China White, Dance Fever, Friend, Goodfellas, Jackpot, Murder 8, and Tango & Cash.

Fentanyl and other synthetic opioids are the most common drugs involved in overdose deaths. Fentanyl is up to 100 times more potent than morphine and 50 times more powerful than heroin. The extremely high potency of fentanyl means that only a few stray crystals of the substance injected, inhaled or even absorbed through the skin can be lethal. Once ingested, the drug quickly takes effect, spiralling many of its victim into overdose in a matter of seconds. This is significantly faster than a heroin overdose, which usually begins several minutes after ingestion. 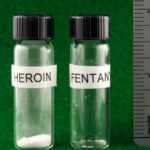 It’s deadly because it’s so much stronger than heroin, as shown by the photograph, which was taken at the New Hampshire State Police Forensic Laboratory. On the left is a lethal dose of heroin, equivalent to about 30 milligrams; on the right is a 3-milligram dose of fentanyl, enough to kill an average-sized adult male.

Opioids are a class of drugs naturally found in the opium poppy plant. Some opioids are made from the plant directly, and others, like Fentanyl, are made by scientists in labs using the same chemical structure (semi-synthetic or synthetic). They include strong prescription pain relievers, such as Oxycodone, Hydrocodone, Fentanyl, and Tramadol. The illegal drug heroin is also an opioid.

Most of the illicit fentanyl consumed in the world is imported from China. They are not manufactured with any regard for human life or public safety. It is often sold over the Internet using the Dark Web and other anonymous networks to evade law enforcement scrutiny.  Clandestine labs produce a cheap, crystallized version of the drug and send it to countries across the globe, where it’s mixed with other illicit substances to boost their potency. This mixing isn’t just done with conventional street opioids like heroin.  Illegal fentanyl is being mixed with other drugs, such as cocaine, heroin, methamphetamine, and MDMA. In other cases, fentanyl is illegally pressed into pill form and passed off as a prescription opioid, like OxyContin. These drugs are deadly at very low doses and come in several forms, including powder, blotter paper, tablets, and spray.

Dealers in turn try to include fentanyl to improve potency, but their measuring equipment is usually not fine-tuned enough to ensure they stay below the levels that could cause users to overdose. Plus, the fentanyl sold on the street is almost always made in a clandestine lab; it is less pure than the pharmaceutical version and thus its effect on the body can be more unpredictable.

Synthetic opioids, including fentanyl, are now the most common drugs involved in drug overdose deaths in the many countries in the world. Fentanyl-related casualties reportedly rose nearly 70 percent from 2014 to 2015 in many states in the USA.

What are the symptoms of an opioid overdose?

Opioids affect the part of the brain that regulates breathing. When people take high doses of opioids, it can lead to an overdose, with the slowing or stopping of breathing and sometimes death. Note that fentanyl can cause these symptoms within seconds after using: 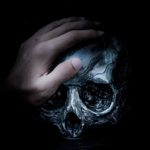 Fentanyl overdoses are usually accompanied by health complications that make it difficult to revive victims. Many experience “wooden chest,” a side effect where the chest seizes up and becomes temporarily paralyzed, stalling breathing and causing asphyxiation. This paralysis can spread throughout the body, locking the jaw and making it difficult for emergency professionals to perform rescue breathing or CPR. Naloxone is a medicine that can be given to a person to reverse a fentanyl overdose, but often proves ineffective in the case of fentanyl overdose. While a single dose can reverse heroin overdose, several are required to bring someone back from the brink of fentanyl overdose.

What are the symptoms of opioid withdrawal?

People addicted to fentanyl who stop using it can have severe withdrawal symptoms that begin as early as a few hours after the drug was last taken. These symptoms include:

These symptoms can be extremely uncomfortable and are the reason many people find it so difficult to stop taking fentanyl.

What should I do if I think that someone is having an opioid overdose?

If you think someone is having an opioid overdose, 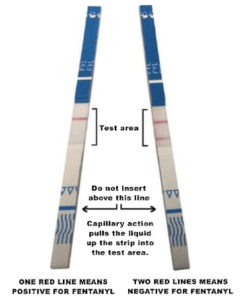 ‘’Fentanyl Self-test Strips’’ were developed to help detect fentanyl in drugs.  An addict can then for example decide if they want to take the risk and use the product or not.  Sometimes not even dealers know what the drugs contain that they are selling.

When the FTS is dipped into a solution containing a dissolved substance (i.e. drugs), it can indicate the presence of fentanyl and certain analogues. A limitation of the test strips is that they do not give any indication of how much fentanyl – or fentanyl analogues – is present.

Additionally, if a test result is negative, participants are informed that the test strip only tested for fentanyl and some analogues and their negative test result could not ensure that their drugs were not adulterated with other substances which could be more potent than fentanyl (e.g. carfentanyl).

You can chat to a facilitator on the LIVE CHAT Helpline for more help or guidance.