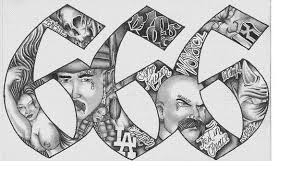 An investigation in 1997 led to the discovery of a devil group worshipping group that moved down from Northern Africa and settled in Maseru, Lesotho. The group practiced theistic Satanism which they combined with African witchcraft.

This new satanic movement spread rapidly along South African border towns such as Fouriesburg, Clocolan, Tweespruit, Wepener, Zastron, Thaba Nachu and others. At this point groups were loosely structured and more focussed on ritual magic, blood sacrifices, the drinking of blood and worshipping Satan as deity. As these devil worshipping cults grew over a period of 15 years, they spread throughout the Free State province, especially in the rural areas. They became known as the 666’s.

The leaders of the 666’s are known as the King and Queen. Young girls are chosen as so-called princesses, with specific tasks. They need to recruit new members for the gang. New members are tattooed with three dots which represent the numbers 666. They believe that the tattoo  – also referred to as barcodes – opens up the door for the King or Queen to visit the individual in their dreams or in an astral body i.e.in the spirit. The individual’s spirit will then be taken to a specific site were various rituals, such as drinking blood are performed. The individual is then initiated into the devil worshipping group or the 666’s. The are then giving three options to choose from in order to confirm their allegiance to the group:

Other devil worshipping gangs also emerged from this satanic cult, each with their own agenda. They are

Each of these gangs is accountable to the religious governing body of the 666’s. Children as young as nine years are recruited into these gangs. Gang members are marked with three dots, or NBK, BTK or an inverted cross with the numbers 666. 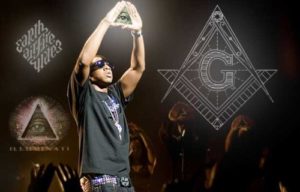 The Illuminati is another recent established satanic gang.This gang is influenced by both the practices of the 666’s as well as the American satanic rappers, such as Jay Z, who proclaims to be a Freemason and Devil worshipper.

This gang’s main symbol is a triangle with an eye in the middle, also known as the Third eye, Evil eye or Eye of Horus.  The members practice active devil worship and partake in the same rituals as the 666’s.

A third gang also involved in practicing active devil worship is the IJP or International Junior Portuguese. Members are tattooed or chapped with the letters IJP overlapping each other with three dots. They are known to mark young girls with a dot between their eyes. This implies that any gang member may have sex with them without their consent.

How do they go about?

Only males may join the BTK or NBK, but males and females may join the 666’s. A King with various Queens will rule an area. The NBK and BTK are providing income to the 666’s via trading in body parts for muti as well as organised crime such as car theft and other serious crimes.

Teachers who confront gang members in class are openly threatened by members. Children are also forcefully abducted and and marked with three dots, creating intense fear in the communities and schools. The forceful marking of children with satanic gang symbols have often resulted in children mutilating themselves in order to get rid of the tattoos. Many of the gang members have been arrested during the past 15 years, which have strengthened their presence and influence within the prison system.

Why do children join these gangs?

Many of the children joining these gangs are from extremely poor, abusive, dysfunctional homes with absent fathers. They are lured into the gangs by promises of money, fame, protection, revenge, power – physically and spiritually, as well as easy access to drugs and sex.

Why is it difficult for children to leave the gangs?

What are indications of gang involvement that parents need to look out for?

If you encounter any of the problems stated in this article, you can contact Auksano in Bloemfontein: 051 -422 5454

You can also talk to a Mobieg facilitator to get help on the LIVE CHAT.

You can do a self-test quiz to learn more about the signs and symptoms of gang involvement.

The article about the 666’s was originally written by Johan de Beer, who is a functional therapist at Auksano.

Johan de Beer was a captain in the SAPF and was the co-coordinator of the Occult Related Crime Unit in the Free State and surrounding areas. The unit dealt with obscure crimes such as muti murders, criminal activities of Satanists and witchcraft ritual abuse, substance abuse as well as child abuse. He acquired a post graduation qualification as Functional therapist from Unisa. He registered Auksano as an NGO in 1997. Auksano is a trauma therapy centre situated in Bloemfontein.