PID can be caused by many different bacteria, including Chlamydia and gonorrhoea. It occurs when these bacteria move up from the vagina or cervix into the uterus and other reproductive organs. 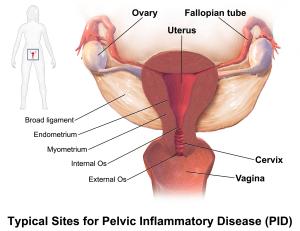 Many women with PID don’t have any symptoms at all it – is called a silent PID.

If they do have symptoms, they may include abdominal, cervical or uterine pain or tenderness, along with fever or chills.

Symptoms of PID usually occur in the first five to ten days of a woman’s menstrual cycle.

Other signs include the following:
• Bleeding between menstrual periods
• Unusually heavy bleeding during periods
• Increased or foul-smelling vaginal discharge
• Frequent or painful urination
• Pain in the lower pelvis during menstruation
• Nausea and vomiting
• Fever and chills
• Pain during sex

Numerous bacteria can cause PID, so it is treated with a combination of antibiotics. Depending on the severity of symptoms, antibiotics may be given through an IV or orally. Some PID infections may require hospitalization.

Avoid unsafe sex where you can be infected with a STD. Wearing a condom during intercourse helps prevent the STD’s that often cause this disease. Also, your male partner should tell you right away if he’s having any symptoms of a sexually transmitted disease; these include a pus-like discharge from the penis and pain or burning during urination. By warning you that you need to be tested, he will help you ward off long-term damage to your reproductive system.
• Have regular pelvic exams
• If you’re sexually active, get tested once a year for STD’s
• Avoid douching
• Get prompt treatment for any sexually transmitted disease
• Avoid having intercourse or putting anything such as tampons in your vagina for two to three weeks following a miscarriage or an abortion and for six weeks following childbirth.

If you suspect you might have contracted a STD, you can do a self-test quiz on STD’s, the  STD Quiz.

You may chat to a facilitator on LIVE CHAT if you have more questions. The service is free and you may stay anonymous.