How you argue — especially how you end an argument — can determine your relationship’s long-term success or failure.

8 Tips to handle a disagreement responsibly:

Take it private and keep it confidential.

Please don’t bring up old grudges or sore points when they don’t belong in a particular argument. Put boundaries around the subject matter so that a fight doesn’t deteriorate into a free-for-all.

Deal with the issue at hand, not with a symptom of the problem. Get honest about what is bothering you or come away from the exchange even more frustrated. The best way to achieve this is to share what you feel and not to attack, for example:

Do not insult your partner

Stay focused on the issue, rather than deteriorating to the point of attacking your partner personally. Don’t let the fight degenerate into name-calling. Again instead share what you feel and how you feel about something than accusing or blaming.

Accusing or blaming puts someone on defence immediately. A person who has to defend themselves immediately thinks with their ‘’reptilian brain’’ which controls the fight or flight reaction.

No rational thinking is possible while a person reacts with their reptilian brain – which controls instinct and reflex. You need a calm person to disagree with if you want them to understand – thinking with their modern brain with the highest level of control and foresight.

Focus on solving the problem or reaching a compromise 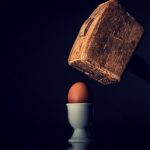 Every single thing you disagree about is not an earth-shattering event or issue. You do not have to get mad every time you have a right to be. Remember, when you get angry, you are using your reptilian brain, and you go into flight or fight mode. It is always counterproductive to try and solve a disagreement when you are in fight or flight mode.

Make sure to talk and then END the discussion.

Arguments should be temporary, so don’t let them get out of hand. Don’t allow the ugliness of a fight to stretch on indefinitely. If one of you gets angry, take time-out immediately. Continue the discussion when you both have calmed down. Solving problems requires rational thinking.

Chat to an online counsellor on LIVE CHAT if you need more advice. The service is text-based, and you may stay anonymous.

Why are you in a relationship?

How to change your thinking