How does a pregnancy develop?

How does pregnancy happen?

Can Pre-ejaculate Cause Pregnancy?


How long does it take to get pregnant after sex?

Pregnancy does not start immediately after sex. It can take the sperm up to 6 days to reach the female egg (ovum) and fertilise it. Then it can take another 6-10 days for the fertilised egg to travel to the uterus and implant in the lining of the uterus wall. The fertilised egg then start secreting human chorionic gonadotropin to keep the pregnancy intact. This hormone is detected by urine and blood tests and usually confirms pregnancy.


Can I Get Pregnant if His Penis Gets Near My Vagina but Not in It?

Pregnancy can happen when sperm gets in the vagina or on the vulva. The most likely way to become pregnant is through unprotected vaginal intercourse.

However, suppose partners engage in body rubbing with their clothes off. In that case, there is a chance that sperm may come into contact with the vulva or vagina — which can cause pregnancy, even if partners don’t have vaginal intercourse.

If partners are concerned about the risk of pregnancy from body rubbing, they may want to consider using condoms or another birth control method. Condoms also reduce the risk of sexually transmitted infections that can be spread in ejaculate and pre-ejaculate.

If partners have reached the point where they may start having vaginal intercourse, they should talk about what kind of birth control they want to prepare themselves before they start having intercourse.


What time of the month can I fall pregnant?

You can get pregnant if you have sex up to 5 days before you ovulate or up to 24 hours after you ovulate. However, not everyone ovulates on day 14, so it’s tough to tell when you ovulate unless you use ovulation predictors and chart your temperature to confirm that you did ovulate.

If you had unprotected sex and fear pregnancy, you could take the ”morning after pill”. The morning after pill is effective if started within 72 hours after unprotected intercourse. If started within 72 hours, EC can reduce pregnancy risk by 75 to 89 per cent.  EC triggers menstruation and removes the uterus’ lining so that the fertilised can’t plant into it. So, the sooner it’s taken, the better.

Emergency contraceptive pills often referred to as the “morning-after pill, ” are commonly used to prevent pregnancy after sexual intercourse and can be effective up to 72 hours after intercourse. It helps to prevent 3 out of 4 pregnancies that would have happened.

Emergency contraceptive pills (high dose hormone pills) are available at most South African pharmacies and is available over-the-counter without a prescription if you are over 16 years old. If you are under the age of 16, you will require a prescription from a doctor to purchase the morning after pill at your pharmacy.

Emergency contraceptives work by delaying or inhibiting the release of an egg (ovulation), altering the luteal phase length, and possibly inhibiting a fertilised egg implantation. In the unlikely event that implantation does occur, EC does not interrupt the pregnancy or put the foetus at risk. It is not an abortion pill.

Side-effects can be quite severe, but it usually only lasts 24-72 hours. It can include nausea, abdominal pain, headache, dizziness, fatigue and breast tenderness. If vomiting occurs within the first 2 hours of taking the pill, it might be necessary to take another dose. Consult with your health care provider. Using the morning-after tablet has no long term or serious side-effects, and there is no limit on how many times you can use it per year. Do not use it as a family planning method, though – there are better products available for long term contraception.

Pregnancy tests look for Human Chorionic Gonadotropin (HCG) in the urine or blood. HCG, sometimes called the pregnancy hormone, is only there when a woman is pregnant. There are two kinds of pregnancy tests: urine and blood. 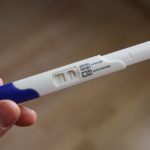 Women and girls whose menstrual periods are one or more weeks late are advised to have a pregnancy test. These tests are free at primary health clinics and other health facilities. However, they are not always available. You can buy pregnancy testing kits at a pharmacy. The best tests notice minuscule amounts of HCG, so look for one in the 15 to 30 HCG level.

Home pregnancy test kits claim to be 97 to 99 % accurate if they are used correctly. That’s why following the directions are so important. Also, check the package’s expiration date—an old kit won’t give you accurate results.

At a clinic, tests are free. The nurse will ask for a urine sample, which will be tested. Results are available immediately.

Once pregnancy has been confirmed, there are several options. If the client wants to keep the pregnancy, she will be referred to health facilities called Midwife Obstetric Units (MOUs). These are birthing units run by midwives in the community for primary health care patients. If the mother does not want her pregnancy, she is entitled to ask about other options, including Termination of Pregnancy. Take note: you have to get a referral letter from your clinic to your nearest hospital if you want an abortion.

If you are a first-time visitor to a health facility, you will be asked to fill out a form, and the sister will open a folder. Bring your ID book, any medication you are taking, and a clinic or hospital card if previously registered at the facility.

This is a sonar of early pregnancy: 6-8 weeks.

How to determine gestation (how many weeks are you pregnant?)

To plan or not to plan?

Should we plan for a baby or take it as it comes? A baby needs both mother and father to thrive.  A child is a very costly, lifelong responsibility. Plan to have a baby – don’t’ have them.


If you’re pregnant, you can help yourself and your baby by:

If you have more questions, can text chat with an online facilitator on  Live Chat.

The chat is a text-based service and you may remain anonymous.

If you suspect you might be pregnant, you can do a self-test: