Primary HIV infection is the first stage of HIV disease when the virus first establishes itself in the body.

Some researchers use the term acute HIV infection to describe the period of time between when a person is first infected with HIV and when antibodies against the virus are produced by the body (usually 2 – 12 weeks).

During this time, the body is trying to fight the virus and make antibodies to help. The person looks healthy and is usually symptom-free.

Up to 70% of people newly infected with HIV will experience some “flu-like” symptoms.

These seroconversion illness symptoms, which usually last no more than a few days, might include fevers, chills, night sweats, sore throat, lymph glands may be swollen, and skin rashes. The remaining 30% of people either do not experience any symptoms or have symptoms so mild that they may not notice them.

The person is highly infectious and can easily infect others at this stage.

People at this stage often have a very high HIV “viral load“ and are very infectious. The person still appears healthy despite the high viral load. This is, however, the time when they are at the highest risk to infect others.

People with acute HIV infection usually will not test HIV antibody positive since it takes the body approximately one to three months to produce antibodies against HIV. 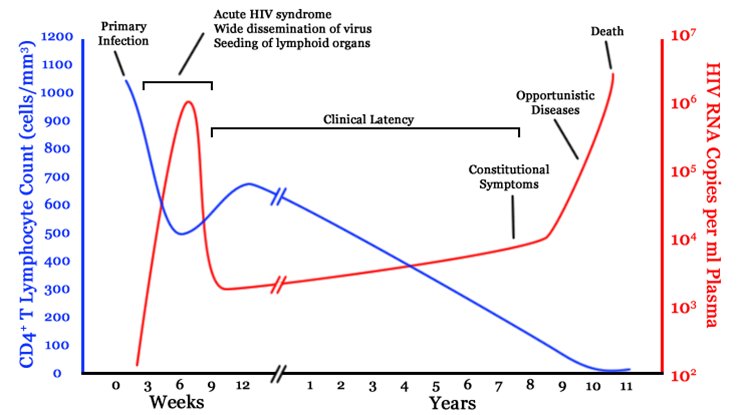 The virus appears to slowly damage the immune system for several years after infection (perhaps because the body can keep it in check during this time).

However, in most people, a faster deterioration of the immune system occurs at some point, and the virus rapidly replicates/ multiplies again.

This damage can be seen in baseline blood tests, such as lowered CD 4 T-cell counts before any actual symptoms are experienced.

HIV-positive people should see a doctor monitor their immune system.

By getting baseline blood tests and observing how they are changing over time, they can better understand whether HIV has already caused any damage to their immune system.

In the last couple of years, development in the treatment of HIV disease is what doctor’s call “Early Intervention” or “Early Care.” A person is now started on ARV’s a soon as possible after being diagnosed to prevent immune system deterioration.