A decrease in viral load is the aim and result of effective HIV treatment. If you are HIV positive and do not take ARV’s, the HIV viral load in your blood will increase.

HIV viral load predicts how fast the disease will progress, while other tests, like the CD 4 count, indicate how much damage the virus has already caused.

Human immunodeficiency virus (HIV) is the virus that causes acquired immunodeficiency syndrome (AIDS). When a person is initially infected with HIV, the virus replicates — it produces more and more copies of itself. The main target of HIV is the CD 4 cells, which are a type of white blood cell that fights infections. The virus enters the cells and uses them to replicate and spread throughout the body. It moves into the lymph nodes, spleen, and other parts of the body.

There may not be any noticeable signs or symptoms of disease or only flu-like symptoms in the early stages of infection. However, the virus is usually present in high amounts. Without treatment and even when there are no symptoms, the virus continues to replicate, and the viral load will increase. HIV kills CD 4 cells, so the number of CD 4 cells will decrease as HIV infection progresses.

When a person is diagnosed, anti-retroviral treatments for HIV (also called highly active antiretroviral therapy or HAART) are initiated to suppress the amount of HIV present in the blood, limiting its ability to replicate and reducing the risk of progressing to AIDS. If a person with HIV discontinues treatment or if the medication loses its efficacy, then the person’s HIV viral load can begin to increase again.

The HIV RNA test detects HIV genetic material and measures how many copies of HIV (viral load) are present in the blood at a particular time. It can track increases and decreases in HIV viral load and, in conjunction with a CD 4 count, evaluate treatment effectiveness. Blood is drawn from a vein in the arm for this test. No preparation is needed before testing.

What is a viral load? 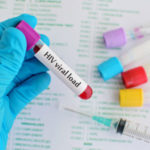 ”HIV viral load” tests are reported as the number of HIV copies in a millilitre (copies/mL) of blood. If the viral load measurement is high, it generally indicates that HIV is present and replicating.

Your doctor can order a viral load test to assess the level of HIV in your body. It measures the number of HIV particles in a millilitre of your blood. Those particles are also known as “copies.”

A low viral load is a sign of the virus copying itself in low amounts in the body. The goal of HIV therapy is to lower your viral load below the detectable level.

Why is it important to consider multiple test results?

A single test result can only tell you so much about your CD 4 levels, viral load, and overall health. The numbers often vary from one test to another. Preferably the same test should be used in follow up tests, because various tests may produce different results.

Also, after contracting HIV, there is a period when the virus makes several copies, leading to a viral load spike. Once your immune system responds to it, it will decrease to a base level. The time of day, any illnesses you have, and recent vaccinations can also affect your CD 4 count and viral load.

As a result, it’s important to consider trends in your test results, rather than just individual test results.

If your viral load stays under 200 copies per millilitre, you’re considered virally suppressed and unable to pass HIV on.

Chat to a counsellor for more help:  LIVE CHAT

The chat is text-based and yo may remain anonymous.