”Dead girl walking”, the boys say in the hall

”Tell us your secret”, the girls whisper. One toilet to another

I am that girl. I am the space between my thighs, daylight shining through.

I am the bones they want, wired on a porcelain frame.

Eating disorders describe illnesses characterized by irregular eating habits and severe distress or concern about body weight or shape. Eating disorders can develop during any stage in life but typically appear during the teen years or young adulthood.¹ Anorexia Nervosa has the highest mortality rate of any psychiatric disorder (Arcelus, Mitchel, Wales & Nelson, 2011).² 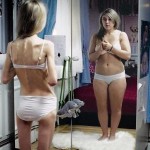 Eating disorders along the continuum

In the United States, 84 per cent of young women want to be thinner than they are. To diet is the most common way people deal with body dissatisfaction. On the far end of the continuum are people who become so obsessed with their body image that they develop an eating disorder. (Nolen-Hoeksema, 2014).

Thousands of teens develop eating disorders every year, or problems with weight, eating, or body image. An eating disorder is more than just going on a diet to lose weight or exercise every day. They’re extremes in eating behaviour – the diet that never ends and gradually gets more restrictive.

What are the different types of eating disorders?

Anorexia nervosa– is the starvation of oneself by eating less or as little as possible.

Binge eating disorder – is eating a considerable amount of food at one time.

Other lesser-known disorders are:

Pica – is an unusual craving for eating, licking or chewing on food or non-food with no nutritional value, for example, chalk, paper, sand, plastic.

EDNOS – is an eating disorder that does not fall in any of the above categories – a combination of the symptoms of anorexia, bingeing and bulimia.

Eating disorders are complex illnesses with a genetic component that can be affected by various biological and environmental variables.

Though the exact cause of eating disorders is unknown, it is generally believed that a combination of biological, psychological, and environmental abnormalities contributes to developing these illnesses.

Examples of biological factors include:

·    Eating disorders, like most psychological disorders, runs in families.

·    Bodily systems that regulate appetite, hunger, satiety, initiation of eating, and eating cessation can be causes of eating disorders.

Examples of psychological factors include:³

Examples of environmental factors that would contribute to the occurrence of eating disorders are:

What are the signs & symptoms of an eating disorder?

Note: if you have even the smallest suspicion you are in medical danger, consult a physician immediately. Eating disorders can kill, and if you are already in trouble, you need medical attention, not self-help tips.

The road to eating disorder recovery starts with admitting you have a problem.

You have to rediscover who you are beyond your eating habits, weight, and body image.


The first steps to recovery:

Please reach out for support.
It can be scary and embarrassing to seek help for an eating disorder, but opening up about the problem is an essential step toward recovery. However, it’s vital to choose someone who will be supportive and truly listen without judgement or rejection. This could be a close friend or family member or a youth leader, teacher, or school counsellor you trust. Or you may be more comfortable confiding in a therapist or doctor.

To start a conversation can be the hardest part. One way is to say, “I’ve got something important to tell you. It’s difficult for me to talk about this, so it would mean a lot if you’d be patient and hear me out.” From there, you may want to talk about when your eating disorder started, the feelings, thoughts, and behaviours involved, and how the illness has impacted you.

Be patient because your friend or family member will have their emotional reaction to learning about your eating disorder. They may feel shocked, helpless, confused, sad, or even angry. They may not know how to respond or help you. Give them time to digest what you’re telling them. It’s also important to educate them about your specific eating disorder.

Be specific about how the person can best support you—for example, checking in with you regularly about how you’re feeling, helping you finding treatment, or finding ways to support your recovery without turning into the food police.

You can do a self-test quiz to learn more about the signs and symptoms of eating disorders.

If you need advice or more information, you can chat with an online counsellor on the LIVE CHAT.

You may remain anonymous. The service is a text-based chat.