What does the acronym ‘LGBT’ stand for?

LGBT people, as members of a social minority group, are suffering from various forms of socioeconomic and cultural injustice. The lack of social recognition affects the capacity of LGBT people to fully access and enjoy their rights as citizens.  In addition, they are more likely to experience intolerance, discrimination, harassment, and the threat of violence due to their sexual orientation than those that identify themselves as heterosexual.

Which areas of life does the rejection come from?

It is due to homophobia (the fear or hatred of homosexuality). The labour market, schools, hospitals, and their own families discriminate against LGBT individuals. Their own families disown some. They are singled out for physical attack – beaten, sexually assaulted, tortured, and killed. Some factors that may reinforce homophobia on a larger scale are a dominant group’s moral, religious, and political beliefs. In some countries, homosexuality is illegal and punishable by fines, imprisonment, life imprisonment, and even the death penalty.

Bullying of LGBT children is common in schools, as well. Complaints range from:

What can you do to cope better with rejection? 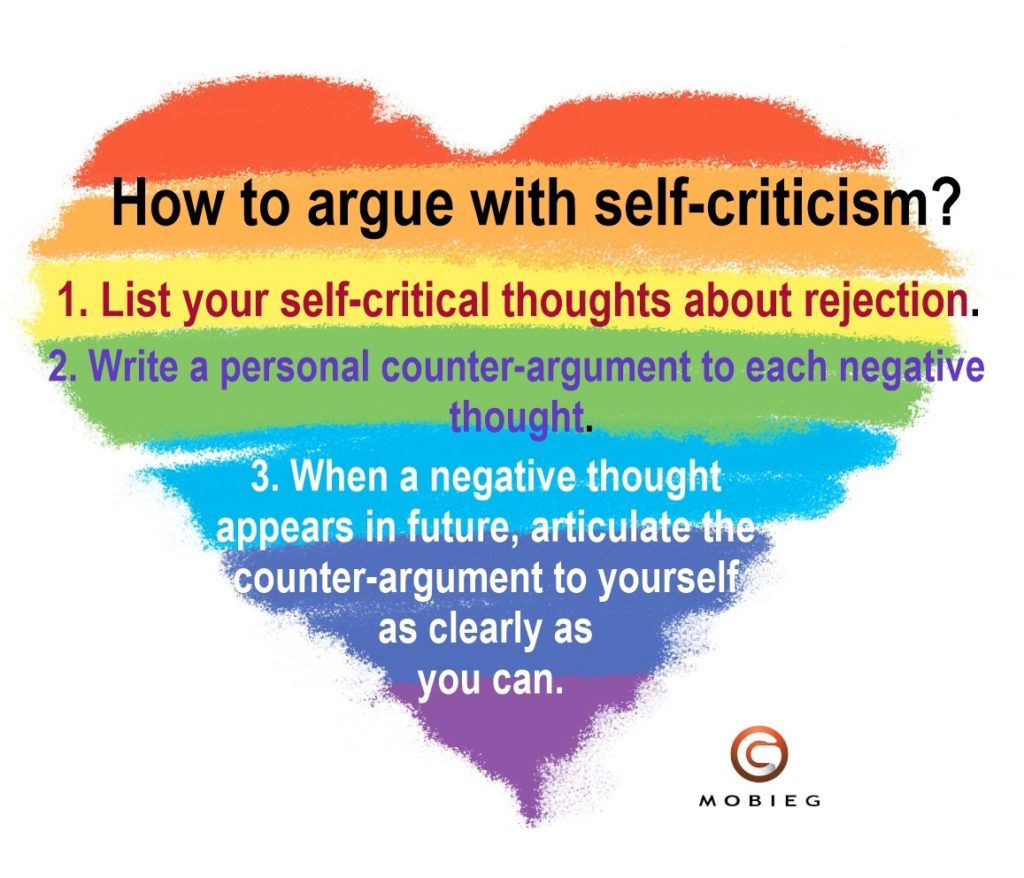 Luckily, we can choose our friends, and we do outgrow certain groups. Make new friends with whom you are a better fit if you feel excluded from a current group.

Treasure memories you have from good times. Photos, letters and mementoes can all help to replenish our urge to belong.

Fact: the more you expose yourself to difficult situations, the less intimidated or sensitive you will become. If you accept that you might be rejected, emotional hurt becomes less and easier to bear.

Note: the American Psychiatric Association removed homosexuality from its list of recognised psychological disorders in 1973. ¹

The attitude of psychology as a profession toward homosexuality changed several decades ago. Early versions of the DSM listed homosexuality as a mental disorder. However, LGBTI persons argue that their sexual orientation is a natural part of themselves. Apart from society’s homophobia, their orientation causes them no discomfort. In addition, there is little evidence that psychotherapy can lead to a gay person becoming a heterosexual person. Therefore, in 1973, the American Psychiatric Association removed homosexuality from its list of recognised psychological disorders.

South Africa’s post-apartheid Constitution 1 was the first to outlaw discrimination based on sexual orientation. In addition, South Africa was the fifth country globally and the first in Africa to legalise same-sex marriage.

Chapter 2 of the Bill of Rights, Section 9(3) states the rights of LGBT South Africans:

“The state may not unfairly discriminate directly or indirectly against anyone on one or more grounds including race, gender, sex, pregnancy, marital status, ethnic or social origin, colour, sexual orientation, age, disability, religion, conscience, belief, culture, language, and birth.”

“No person may unfairly discriminate directly or indirectly against anyone on one or more grounds in terms of subsection (3).”

The Psychological Impact of LGBT Discrimination

LGBT people face multiple levels of stigmatisation, discrimination, and harassment in their daily lives. The majorities of LGBT people learn to cope with this, particularly when they have the support of family and friends and participate with LGBT organisations and social networks. However, a significant number of LGBT people, most particularly younger LGBT people, had to cope with stigmatisation, discrimination, and harassment without support. Many also faced additional stress from experiences such as very high levels of homophobic bullying in schools and physical and verbal attacks.

Most likely due to violence, social rejection, and isolation, the LGBT community experiences higher rates of anxiety, mood and substance use disorders, and suicidal thoughts among people ages 15-54.

Experiences that could negatively impact the mental health of an LGBTI person:

Reliance on bars for socialisation, stress caused by discrimination, and targeted advertising by tobacco and alcohol businesses in gay and lesbian publications are all believed to contribute to increased pressures on LGBT individuals to engage in substance abuse. In addition, internalised homophobia is a form of self-limiting, self-loathing— a critical concept to understand in developing substance abuse services for this population.

Which risk factors could contribute to substance abuse?

How to support the LGBTI individual via communities

We can promote awareness by campaigning for equality for all – the elderly, people of all races, the poor and of course, transgender persons.

Schools and teacher education programmes are crucial sites that can address LGBT issues. To help promote health and safety among LGBT youth, schools can implement the following policies and practices:

Other initiatives to assist LGBT persons are:

For more information, you can do a self-test quiz on homosexuality.

If you have more questions or struggles with being LGBT, you can chat with an online counsellor for more help.

Is my anger good or bad?

How to change your thinking